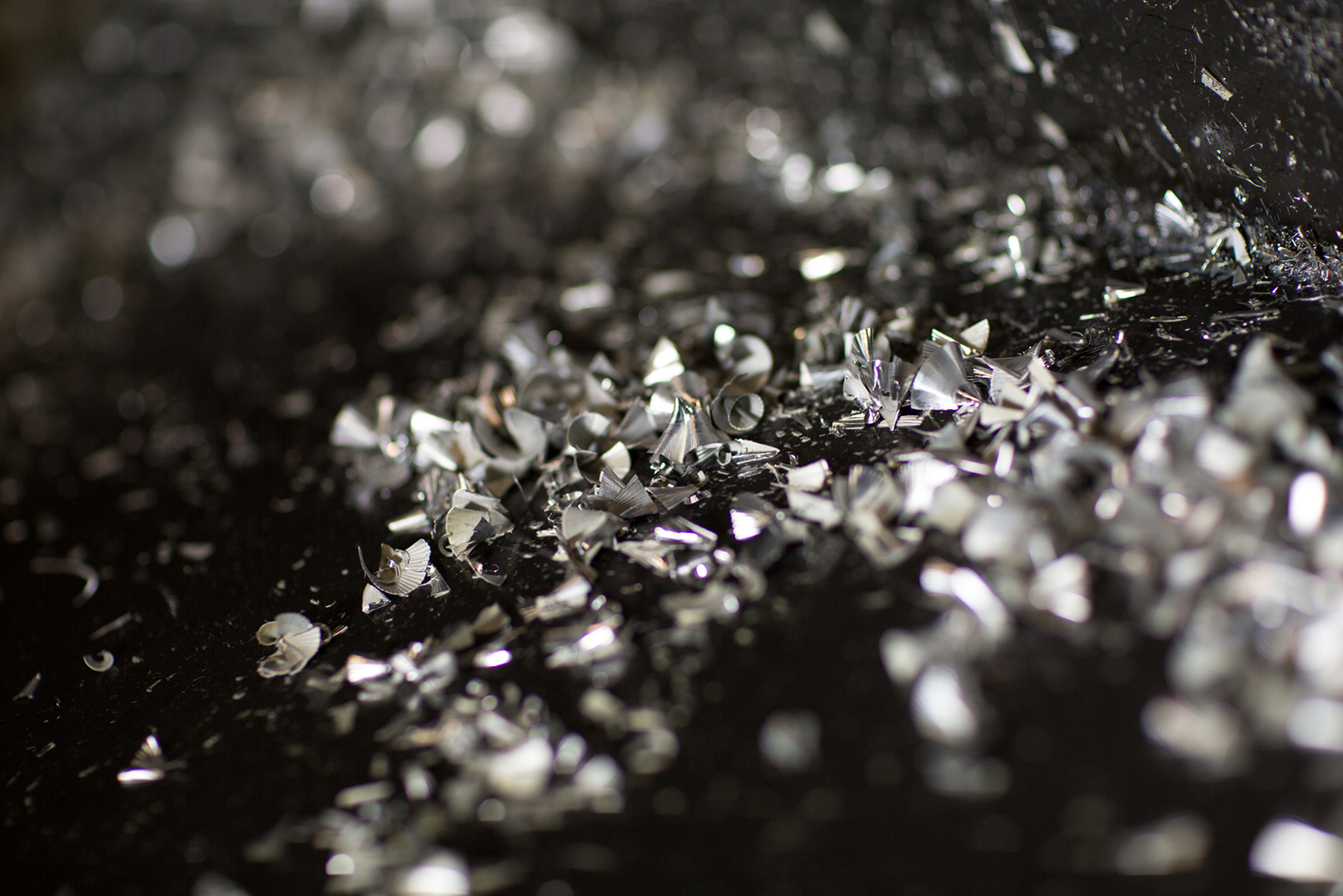 With Chips in their Veins

Arnot Heller and his brother Matt are thirty-something degreed engineers running Central Screw Products and Detroit Gun Works.  They are also fourth generation, hands-on machinists and know a thing or two about machine tools, automation and the critical role of new technology in business growth.

Small, yes, but arguably well equipped – and all ensconced in an ISO 9001 certified environment, and soon to be AS9100 certified in mid-2014.

Great Grandfather and Grandfather Heller came to Detroit during The Depression, right after the war, and the two of them decided they wanted to start AB Heller Screw Products, which was to be a short-run prototype business. However, they couldn’t buy machine tools at the time because of the war rationing. One of them had a relationship with Hardinge (Elmira, NY), and not to be put off by the war rationing, the two elder Hellers decided to buy spare parts out of the Hardinge catalog and assemble their own lathe and chucker. Which they did. The two machines went into a basement, and that’s how they started AB Heller Screw Products.

In 1975 Arnot and Matt’s father bought Central Screw Products (CSP) with the help of his father.  Initially CSP was an Acme Gridley house doing heavy truck work and agriculture work. Under Arnot B. Heller II, CSP ran low volume production screw machine work. Then the boys gradually moved into production machining. “That was one of our problems,” Arnot says.  “Your customers tend to put you into a box, and they like to keep you there. They come to associate your name with certain types of parts and capabilities — whether you’ve outgrown those capabilities or not.” When Arnot and Matt took over, they wanted to pursue CNCs and robots.

Arnot Heller went to work for his father in 1999, and they were doing work for a well-known major tool manufacturer making mechanics hand tools, roughly a $5 million account, running all the components in-house. Then, in June 2001, the tool company called and said, “You guys don’t need to do that anymore.” The tool company had decided to make the components offshore. So in the time it took for one short phone call – CSP went from a $6 million company to a $1 million company.

However, the Heller family believed that there was a place for them to make complex, challenging parts domestically by getting into multi-axis milling and turning. More than that, they needed to take the step up to automation to maximize cost efficiencies.

“And this is what we faced with the launch of Detroit Gun Works (DGW),” Arnot says.

“In 2008 and 2009 the firearms market was booming,” Arnot says. “My brother Matt and I started thinking about this expanding market, and we knew that people who like guns, like to know how they’re made, where they’re made, of what they’re made – they want to know exactly where the parts for any given gun are manufactured and assembled. Also, customers in this industry want a firearm that will fire 100,000 rounds and at the same time look like a highly polished, precision piece of jewelry.

“Further, we understood that to manufacture for the firearms industry, you have to have special permits to make serialized gun receivers; and the Chinese couldn’t get these permits. So right there we’re looking at a product that has to be made domestically. I’ve also felt that if you want to run high-value machine tools and make very cool things, all roads sort of end up leading to aerospace and military.”

Starting out, DGW sold to Tier III firearms builders — builders that would supply police departments, hunting/shooting enthusiasts, and small military outfits. “The model here is pretty simple,” Arnot says. “You have component manufacturers, assemblers, distributors and customers. In the past gun manufacturers were much more vertically integrated, in that they would manufacture, assemble and distribute all under one name and all in one place.”

Today DGW has a core competency in components for the AR-15 and .308 caliber semi-automatic rifles: the frames for the upper and lower receivers in particular.  These are lightweight forged aluminum parts and are run in a special robotic cell.  Another strong competency area lies in bolt carriers, made of 8620, that run on the Puma MX 1600 ST multitasking mill/turn center.

The way the Puma MX purchase came about was like this: Arnot and Matt were at IMTS 2012 looking for a machine with flexibility and versatility to run a number of difficult parts and expand their capabilities. They were looking at a Mori and a Takisawa and came across the Doosan Puma MX. “We bought the machine because I’d always wanted a machine like the Puma MX — a machine shop in a box, really the combination of two lathes and a mill with a B-axis and an automatic feeder on it — all in one package,” Arnot says. “And Matt said you can buy the machine providing you can find a part to run on it.  And the AR-15 bolt carrier was the perfect candidate.

“Plus, we looked at the success we’ve had with the Doosan MV, which runs 20 hours a day every day of the year. The MV really kicks butt and is a fantastic workhorse.”

They bought the Doosan Puma MX right off the show floor.

Arnot says, “The Puma MX allows us to perform under pressure — running bolt carrier parts one day and motorsports parts the next.  The machine is extremely versatile. We spec’d out the Puma MX as the perfect machine to manufacture the bolt carrier. The reason is that it’s an 8620 part, and we needed the horsepower that we can get from a Doosan and the rigidity to hold tight tolerances on the OD that runs back and forth in the upper receiver, as well as holding the concentricity and tolerance requirements on the ID. In addition there are some pretty significant milling features on the part.

“We use over 100 per cent of the torque and the full 12,000 RPM on the B-axis to mill flats on the back and front sides, as well as using 4-axis capability to do cam slots. We also have high-pressure coolant through the B-axis, which allows us to get incredible tool life in the small holes that we drill in the part.  So, not only do we use the left spindle but we also pass the part off to the right spindle to get the part in a single hold, and use the upper and lower turrets to do simultaneous multitasking machining to get our cycle time as low as possible to make this component.

“Finally, the Puma MX is a great machine because these parts require hard turning on the ID of the three diameters on the one end to allow the bolt to ride correctly back and forth, and the Puma MX is rigid enough to allow us to do the hard turning at the same time as we’re running the other primary operations.”

Matt adds:  “A lot of our competitors are running components with relational tolerances from the milling operations to the turning operations, and being able to do that in a single clamping and then being able to pass the part from the left spindle to the right spindle and having the capability to mill in either turret via the B-axis, we’re able to maintain our tolerances and are capable of doing more challenging parts than we were able to do in the past.”

The Doosan Puma MX 1600 ST is a good example of how DGW has changed over the last year or so. It’s a very technical piece of equipment that requires skilled labor to run it — not just button pushers, but rather people who can visualize how to run a part. On this particular machine there’s probably 100 different ways that you could run the same part because of the machine’s versatility, so the trick is how to optimize that kind of flexibility and versatility. Not just to look at how fast a part can be run, but rather to run it right and for long periods of time. With the bar feeder you can load 20 bars, 2″ x 12′, and let the thing run for days, if you should so choose. Of course you’ve got to make sure that the tools hold out for that long. To assist there is a tool monitoring system that automatically checks for worn or damaged tools as well as the presence or absence of tools.

“This is really a highly technical gateway machine, in that it can open avenues to many other industries and applications and consequently many other types of customers,” Arnot says. “The reason we purchased this piece of equipment was because this is where we see the direction of our company going, in terms of value added services, engineering, design for manufacturing, and making components that other people cannot make.

“We are both degreed engineers. Matt is primarily focused on sales, and I have been more focused on the day-to-day operations side of the business. We recently brought on a seasoned firearms industry engineer and business development executive with over two decades of experience to help us grow our DGW brand. But over time we’re looking at hiring people to work with Matt on the sales side as well as people to work with me on the operations side. The types of employees we want to attract want to run new, exciting, complex machine tools like the Puma MX.  These people are essential to our growth and long term success. It’s a growth pattern that we see evolving over time.

“DGW is now running two shifts a day, and because of automation they run the machines untended during what would be a third shift. Which is great machine utilization, and we couldn’t achieve this without a machine capable of performing under the pressure our customers demand.”

Arnot summarized by adding, “The emphasis for both companies will continue to center around building out new core competencies with a focus on using best practices in lean manufacturing, sophisticated cutting-edge technologies, robotics, and automation.  These are our core beliefs, and we believe, this is how we can best serve our customers cost containment and quality needs.”

After talking with the Hellers, I think it’s safe to say they have both chips and cutting fluid in their veins.